Faced with one obstacle after another, Lennox grad pushed on 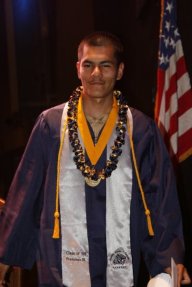 “My name is Francisco Hernandez and I am writing this statement to explain various events and circumstances that currently present themselves as obstacles toward myattending a four-year university.”

Francisco went through the colleges’ e-mailed responses one by one.

Like so many other aspects of Francisco’s life, adversity and disappointment again seemed to be taking over. He began to think about moving to Texas to live with his older sister.

It looked like Francisco would have to disregard the 4.1 grade point average he earned at the Lennox Mathematics, Science and Technology Academy. Instead, he figured he would work and attend community college.

Someday, the 18-year-old Lennox student would earn enough money to send himself to a university, one that wanted him and one he could afford.

Then he opened the last e-mail.

Francisco and his two sisters began their lives in Guadalajara, Mexico. They lived with their parents above their uncle’s restaurant where the adults worked.

Before long, they followed their father to California, moving into a room in Lennox, living under the roar of jets landing at Los Angeles International Airport.

Life for Francisco wasn’t easy. His father abused his mother and served jail time for it. He cheated on her, neglected Francisco, and ultimately moved away.

Francisco’s mother, Ana Rosa Hernandez, worked in the same restaurant as her husband, learning he was having an affair with another employee.

“When I picture my parents screaming, I can remember myself in a corner of the room covering my ears and screaming as loud as I could just so that I wouldn’t have to hear them,” Francisco recalled.

As Francisco grew up, his mother was diagnosed with Takayasu’s arteritis, a rare condition that causes blood vessel inflammation that damages the aorta. She required weekly hospital visits and open-heart surgery.

She couldn’t work at times, but found a job as a low-paid cook in a Lennox restaurant.

“It was really hard for us. We have no family here,” Francisco recalled. “Our life wasn’t very much.”

Despite the family’s problems, Francisco made the honor roll at Buford Avenue School.

But when he reached the fifth grade, his father took him back to Mexico, splitting up the family.

They moved into two rooms at the back of his uncle’s restaurant. Within weeks, his father brought his girlfriend from the United States to live with them.

“After that, he kind of stopped taking care of me,” Francisco said. “He stopped caring if I did my homework, if I showered or not. I would sometimes rarely see him.”

His aunt fed him and looked after him, aware that his father paid no attention.

At the start of the eighth grade, Francisco’s father brought him back to Lennox, returned him to his mother, and moved to Oregon.

Unlike his father, Francisco’s mother was strict. She required him to do well in school.

Francisco quickly earned a 3.9 GPA at Lennox Middle School and made the honor roll. He earned a 4.0 the second semester.

“I felt that somebody cared for me and somebody wanted to see me succeed – not nagging but `You have to be someone in life, not work like me and your dad.”‘

“Attending a four-year university has been one of my biggest dreams since sixth grade and since then, I have excelled academically.”

Francisco’s mother’s illness worsened. She had repeated surgeries, taking pills to keep her blood flowing and for depression.

“She always told us, `The only reason I am still alive is because of you guys. Here is where you guys can get an education,”‘ Francisco said. “We would say we have to do good in school and be good kids.”

Her moods swung from happiness to sadness. At one point, she downed a bottle of pills. 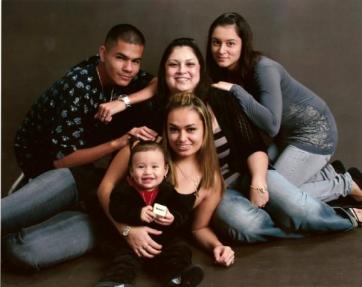 Francisco engrossed himself in school work and sought counseling from his teachers. He regularly talked with Kimberly Chavira, his Advanced Placement chemistry instructor.

Chavira became his confidante, talking with him about everything going on at home as well as normal teenager issues.

“He was just always very sensitive,” Chavira said. “He seemed to need someone to open up to.”

When she never returned home, Francisco and his sisters went looking for her. They discovered she suffered a massive stroke at the hospital and had fallen into a coma.

Francisco and his sisters turned off the machines Oct. 20 when her brain stopped functioning.

“At school, I always try to forget everything,” he said.

“The experience has been both traumatic and devastating for me. I have no relationship with my father, and my younger sister and I were faced with being alone.”

Francisco, who had become president of his student body, believed his days in Southern California were over. At 17, with no family and no money, he figured he was on his way to live with his older sister’s family in Texas.

He had no idea what was going on behind the scenes.

“The thing about Lennox Academy is it’s just a fantastic school,” Chavira said. “He was so college bound. If he had to switch, he would lose all his AP classes and have to figure out the college admissions process on his own.”

Teachers met at a Starbucks coffeehouse.

“Everybody asked me to take him in,” Chavira said. “He would say I was like a second mom.”

But Chavira was six months pregnant. She knew she could not take in a teenager.

Martial arts teacher Erica Delgado was close with Chavira. She didn’t know Francisco well, but she knew about the conversations he’d had with Chavira.

Delgado and her husband, Melvin, the parents of two daughters, offered to house Francisco and his sister.

“I think it’s just the way I grew up,” Delgado said. “When my parents took in relatives that just came from the Philippines or visitors for a couple months, we were told they were relatives but they weren’t.”

Francisco was collecting his transcripts in the school office when he received a call on his cellular telephone.

“It was Mrs. Delgado,” he said. “She told me if I didn’t want to leave, I didn’t have to. I could stay with her, with her family in her house, that they had a space for me and even for my sister.”

At first, Francisco’s older sister, Cinthia, rejected the idea. Chavira talked to her and changed her mind.

Francisco’s father signed over legal guardianship to Delgado and the teen moved into her Eagle Rock home. A home dojo for martial arts was converted into a bedroom.

His younger sister, Maria, however, chose to move to Texas.

For Francisco, living at the Delgado house was awkward at first, but he soon became comfortable.

“They were my heroes,” he said. “I felt that without my mom, I wasn’t going to have anybody else that would care for me except my sisters. They have cared so much for me.”

Delgado said she required Francisco to keep his room and bathroom clean, and do the dishes.

“We don’t try to rein in his life that much,” Delgado said. “We are not there to be his parents. We’ve just given him a place to stay. I never wanted to replace his mom.”

“I stayed in California to finish my last year of high school surrounded by the teachers and friends that love me. Since I basically have no father, and my mom passed away, I have no means of income. The little money I have right now, about a thousand dollars, came from my school so that I have enough income to sustain myself until I graduate from high school.

“I have very little resources to attain money to attend college, and that is the reason I am applying for financial aid.”

Francisco applied to several universities, but knew that without financial help, he had no chance of attending.

He figured his only chance was to attend a private university offering him a scholarship.

“I am a dedicated, hardworking, perseverant student with the mightiest desire to attend college, major in the medicine field, attend medical school and eventually become a neurosurgeon.

“I have everything I need to achieve my aspirations, except the money necessary to pay for all of it. I want to be able to attend college, and I want to become someone successful.”

First, officials at Rice University in Texas turned him down.

Disappointed, Francisco waited for the other responses.

Francisco had applied to the remaining school as a joke, figuring a poor Latino from Lennox had no chance to get in.

“Harvard was my last e-mail to open, so I was like, `Heck, all of these schools say `no,’ Harvard’s not going to take me in.”‘

The first words read, “I am delighted to say.”

“I looked back and `delighted to say what?”‘ Francisco recalled. “It said I was accepted. At first, I stared at the computer for a couple of seconds. I was `What?”‘

“My husband and I were jumping for joy,” Chavira said. “We toasted with wine and Francisco was not even around.”

Money remained the issue. Francisco contacted the financial aid office and was told to write a “letter of circumstances.”

Before long, he received an answer. He would receive a scholarship, for a full ride.

“I was like, all of my dreams and all of my mom’s dreams came true,” Francisco said. “She’s been working her magic wherever she is. She’s the one that’s been pushing things so that I could have all this success.”

He also is grateful to all of his teachers, friends and family.

“I’ve gone through all these struggles,” he said. “I just want other people to see that no matter what happens, it doesn’t mean you can’t succeed. It’s up to you. Despite everything that happened to me, I never dropped the ball at school.”

Francisco closed out his senior year Friday as class valedictorian:

“Today we become accountable to the world, to the future, to all the possibilities that life has to offer. Starting today, our job is to show up wide-eyed and willing and ready. For what, I don’t know. For anything. For everything. To take on life. To take on love.”